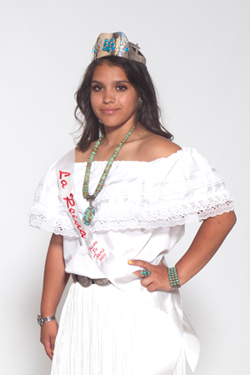 Sheyenne Torrez is a 7th generation Taoseña. She is the daughter of Simon Antonio Torrez Sr. and Lisaann Lenore Gallegos-Torrez, of Ranchos de Taos, paternal granddaughter of Michael and Sylvia Torrez of Ranchos de Taos, maternal granddaughter of the late Marcella Gallegos-Farris and the late Robert Farris of Albuquerque and the great granddaughter of the late Agapita Santistevan and the late Antonio Santistevan of Ranchos de Taos. Sheyenne is a descendant of many surnames that are the soul of Taos history, such as Martinez/Valdez, Romero/Gonzalez, Santistevan/Cortez, and Torrez/Romero. She is 16 years old and a Junior at Taos High School. She carries a 3.9 grade point average in all classes that include AP and Honors core classes. Sheyenne has been on the Varsity Cheer Team since 8th Grade and has been on Cheer and Dance Competition Teams since she was 4. Within the 3 years on the Varsity Cheer Team she has been honored to have won 2 State Championships with her Teammates. Sheyenne is also on the Taos High School Football Team and has been playing Football since she was 7. She started playing because her twin brother was having too much fun without her and she figured since she had to be there she might as well have fun too. It was then that she realized that with hard work and dedication she can do anything that she set her mind to and developed a love for the sport. She is also on the Taos High School Softball Team. Cheer is Sheyenne’s passion in which she hopes to pursue her Higher Education by obtaining an Athletic/Academic Scholarship. After high school she plans to study the fields of Math and Science to either become an Engineer or enter the Medical Field. When she is not busy with schoolwork and going from practice to practice, she enjoys spending time with her family to include her three brothers who test her toughness every day. She loves that she can dance with the best and also spar with the best. Sheyenne is always up for a challenge and when someone tells her she can’t do something; she strives to show them that she can.

Kimberly is 16 years old and will graduate with the Taos High School Class of 2021. She was born and raised in Taos, New Mexico. She loves swimming, reading, photography and going to church. When she was five years old, she was diagnosed with Uveitis and later went blind. As she learned how to read and write in braille, she grew up to now have sight in her right eye. She has had the opportunity to teach braille to several children around the state while attending summer camps where she is mentored on learning the ways of the Blind and Visually Impaired community. Kimberly is also actively involved with St. Michaels Youth Group and a newest member of the Our Lady of Guadalupe Guadalupanas. She is also part of student council, THS swim team, color guard in THS Band, photography club, and a proud Taos Tiger basketball fan. When she graduates, she plans to attend New Mexico State University to earn a degree in Special Education. She is the daughter of Eric Cortez along with her paternal grandparents, Ernest and Rose Cortez. She is proud to have her great-grandmother Tranquilina Pacheco of Arroyo Seco, in her life as well. Her wonderful aunt, Yvette Cortez, is like a mother to her. She has many siblings whom she loves dearly. Also, like many Taoseños, she has many cousins. Kimberly’s family is very supportive of her, and she is extremely thankful to have them. 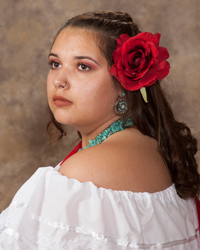 Moniqua is 17 years old and a graduate of Peñasco High School. Her passion is dancing, and she has been dancing since she was practically a newborn. Moniqua danced for the Taos Middle School and Taos High School dance teams up until her sophomore year of high school when she transferred to and graduated from Peñasco High School with two cords of honor on May 25th, 2019. She is planning to attend college in Las Vegas, New Mexico to pursue a career in the Neonatal Field or Forensic Investigative Field at Luna Community College in the fall of 2019. She plans to reside on campus at New Mexico Highlands University to obtain the “full college experience”. Moniqua is the daughter of Heather Marie Lane of Taos and Jason Adrian Gonzales of Peñasco. Her maternal Grandparents are Maysel and Santiago Castillo and Margaret Virginia Lane of Taos. Her paternal Grandparents are Anival Gonzales and the late Mary Evelyn Gonzales of Peñasco.

Marissa is sixteen years old, born in Albuquerque and raised in Taos. She is currently entering her junior year at Taos High School. In her free time, she enjoys playing volleyball. She also enjoys listening to music and horseback riding. Marissa is currently employed at Dr. Jane Compton’s office part time. Along with her job, she spends most of her Sunday’s at mass either at the Santa María de la Paz Parish in Santa Fe or at the Holy Trinity Parish in Arroyo Seco. Currently Marissa is attending classes toward her First Holy Communion and Confirmation. Her future goals are to complete high school along with her Associates Degree and move to Phoenix to attend EMS University. She wishes to pursue a career as a paramedic. Marissa is the daughter of Sandra Villalobos and Stepfather Eric Cebada and her Father is Paul Griego. Her paternal grandparents are Dorothy Gallegos and Paul Griego Sr. and her maternal grandparents are Maria Galindo and Jose Galindo. 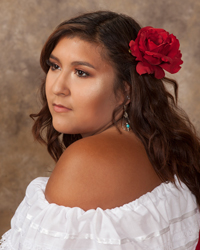 Alexia is 19 years old and is currently attending Adams State University in Alamosa, Colorado, with a major in Secondary Education. She hopes to earn her teaching license in order to teach History and eventually become a counselor. Alexia graduated in 2018 from Taos High School. In High School Alexia was a 3-time Varsity athlete in Basketball and Softball. Along with athletics she fully participated in student government as the Co Student Body President. During the summers she volunteered with the Rocky Mountain Youth Corps, where she worked in a crew of five to obtain her education award. She is currently volunteering as an assistant supervisor working toward her second education award. Alexia is the daughter of Edward and Carla Trujillo of Taos. Her paternal grandparents are Henry and Priscilla Trujillo of La Loma and her maternal grandparents are Jose and Rose Cintas of Cañon.

« Back to the top